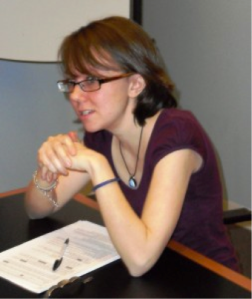 All the world’s a stage. Political geography often adopts theatrical terms such as “actors” and “performance” into its jargon. Using theatrical terms to spotlight the Tibetan government in exile, at a presentation sponsored by the CIGA Seminar Series at the George Washington University, Fiona McConnell delivered a presentation entitled, “Rehearsing the State: The Governance Practices of the Tibetan Government in Exile.” McConnell is a Junior Research Fellow at Trinity College, the University of Cambridge.

Addressing the nature of state and statecraft, she pointed to how the Tibetan government in exile, the Central Tibetan Administration, exercises a degree of sovereignty without having sovereignty. The government in exile is unrecognized and lacks authority. Yet, the Central Tibetan Administration has government headquarters, a network of schools and hospitals, eleven “pseudo-embassies” which organize the Dalai Lama’s official visits, and passport-like official documents.

McConnell discussed the roles and functions of states in the imagination and in reality and the fundamentality of the idea and ideal to understanding polity. She asserted that rather than trying to pin down what a political entity is, it is more productive to ask what it does.

She then turned to the geography of temporality and explained how, in the drama of the Tibetan government in exile, its waiting period before returning to Tibet can be seen as a rehearsal. If statecraft is a set of practices to be performed and perfected, then this rehearsal time presents an anticipatory opportunity to practice and perfect state practices. While in India, the state controls immigration cards and taxes, the Central Tibetan Administration runs foreign visas and day-to-day operations. Tibetan settlements in India are economically sufficient communities which foster nationalism in exile and a pan-Tibetan identity which did not exist in pre-1959 homeland Tibet. Thus, the Central Tibetan Administration has developed state-like practices to ensure uniformity of practices across scattered, diasporic communities.

According to McConnell, exiled communities are defined by a timeline to return. They are shaped by the necessity to deal with both the immediate needs of exile as well as the contested future of its path to statehood. The Tibetan government in exile has been in rehearsal in Dharamshala, India, since 1959. Rehearsal depends on participation, presenting the challenge of how to keep people engaged. It also depends on belief in the script, in the playwright, and in the eventuality of a final performance.

She asks: What does it mean to have been in training for over fifty years? Is Tibet becoming a permanent government of exile? As young Tibetans choose to live and work in Indian cities or immigrate to the West, how are the rehearsal and its players changing?

McConnell positioned the Dalai Lama as playwright because he defines Tibetan culture and keeps its history continuous. The Dalai Lama started the democratization of Tibetan politics, not from popular demand or as a result of a power coup, but as a top-down initiative. Met with some resistance, the Dalai Lama has been persuading Tibetans into accepting democracy while in exile.

The Tibetan government in exile cultivates audiences with other governments using symbols of legitimacy. Despite its lack of legal status, it conducts formal meetings with international leaders, parliamentarians, journalists, non-governmental organizations, and government officials in Dharamshala, thus achieving tacit recognition. 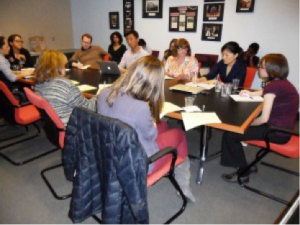 The Tibetan government in exile is not a unique case. McConnell pointed to examples such as the PLO’s state within a state in Southern Lebanon and the de facto state of Somaliland as other non-conventional states. What can these cases tell us about conventional states? McConnell asserted that polity has stateness without statehood because no state has a perfect degree of statehood. Stateness, she said, is always a process, and, to a certain extent, all states are rehearsal states because they respond to changing political realities.

Are Tibetans trapped in a state of infinitely waiting while dreams of statehood fade? McConnell suggests that, “The Tibetan government in exile rehearses how to live back in Tibet while growing roots in India. The present gets squeezed when focusing so heavily on the past and the future.”